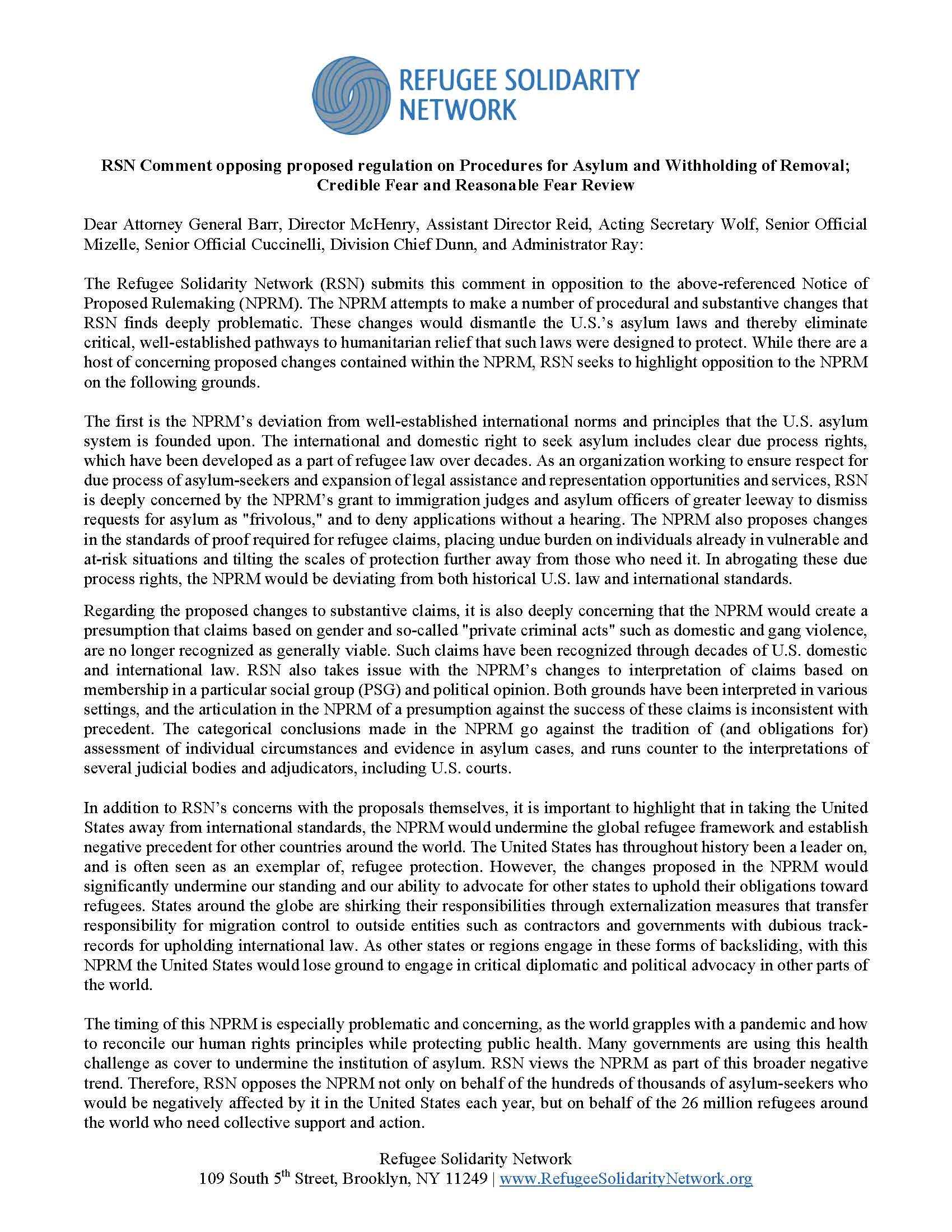 The Refugee Solidarity Network (RSN) submits this comment in opposition to the above-referenced Notice of Proposed Rulemaking (NPRM). The NPRM attempts to make a number of procedural and substantive changes that RSN finds deeply problematic. These changes would dismantle the U.S.’s asylum laws and thereby eliminate critical, well-established pathways to humanitarian relief that such laws were designed to protect. While there are a host of concerning proposed changes contained within the NPRM, RSN seeks to highlight opposition to the NPRM on the following grounds.

The first is the NPRM’s deviation from well-established international norms and principles that the U.S. asylum system is founded upon. The international and domestic right to seek asylum includes clear due process rights, which have been developed as a part of refugee law over decades. As an organization working to ensure respect for due process of asylum-seekers and expansion of legal assistance and representation opportunities and services, RSN is deeply concerned by the NPRM’s grant to immigration judges and asylum officers of greater leeway to dismiss requests for asylum as “frivolous,” and to deny applications without a hearing. The NPRM also proposes changes in the standards of proof required for refugee claims, placing undue burden on individuals already in vulnerable and at-risk situations and tilting the scales of protection further away from those who need it. In abrogating these due process rights, the NPRM would be deviating from both historical U.S. law and international standards.

Regarding the proposed changes to substantive claims, it is also deeply concerning that the NPRM would create a presumption that claims based on gender and so-called “private criminal acts” such as domestic and gang violence, are no longer recognized as generally viable. Such claims have been recognized through decades of U.S. domestic and international law. RSN also takes issue with the NPRM’s changes to interpretation of claims based on membership in a particular social group (PSG) and political opinion. Both grounds have been interpreted in various settings, and the articulation in the NPRM of a presumption against the success of these claims is inconsistent with precedent. The categorical conclusions made in the NPRM go against the tradition of (and obligations for) assessment of individual circumstances and evidence in asylum cases, and runs counter to the interpretations of several judicial bodies and adjudicators, including U.S. courts.

In addition to RSN’s concerns with the proposals themselves, it is important to highlight that in taking the United States away from international standards, the NPRM would undermine the global refugee framework and establish negative precedent for other countries around the world. The United States has throughout history been a leader on, and is often seen as an exemplar of, refugee protection. However, the changes proposed in the NPRM would significantly undermine our standing and our ability to advocate for other states to uphold their obligations toward refugees. States around the globe are shirking their responsibilities through externalization measures that transfer responsibility for migration control to outside entities such as contractors and governments with dubious track-records for upholding international law. As other states or regions engage in these forms of backsliding, with this NPRM the United States would lose ground to engage in critical diplomatic and political advocacy in other parts of the world.

The timing of this NPRM is especially problematic and concerning, as the world grapples with a pandemic and how to reconcile our human rights principles while protecting public health. Many governments are using this health challenge as cover to undermine the institution of asylum. RSN views the NPRM as part of this broader negative trend. Therefore, RSN opposes the NPRM not only on behalf of the hundreds of thousands of asylum-seekers who would be negatively affected by it in the United States each year, but on behalf of the 26 million refugees around the world who need collective support and action.