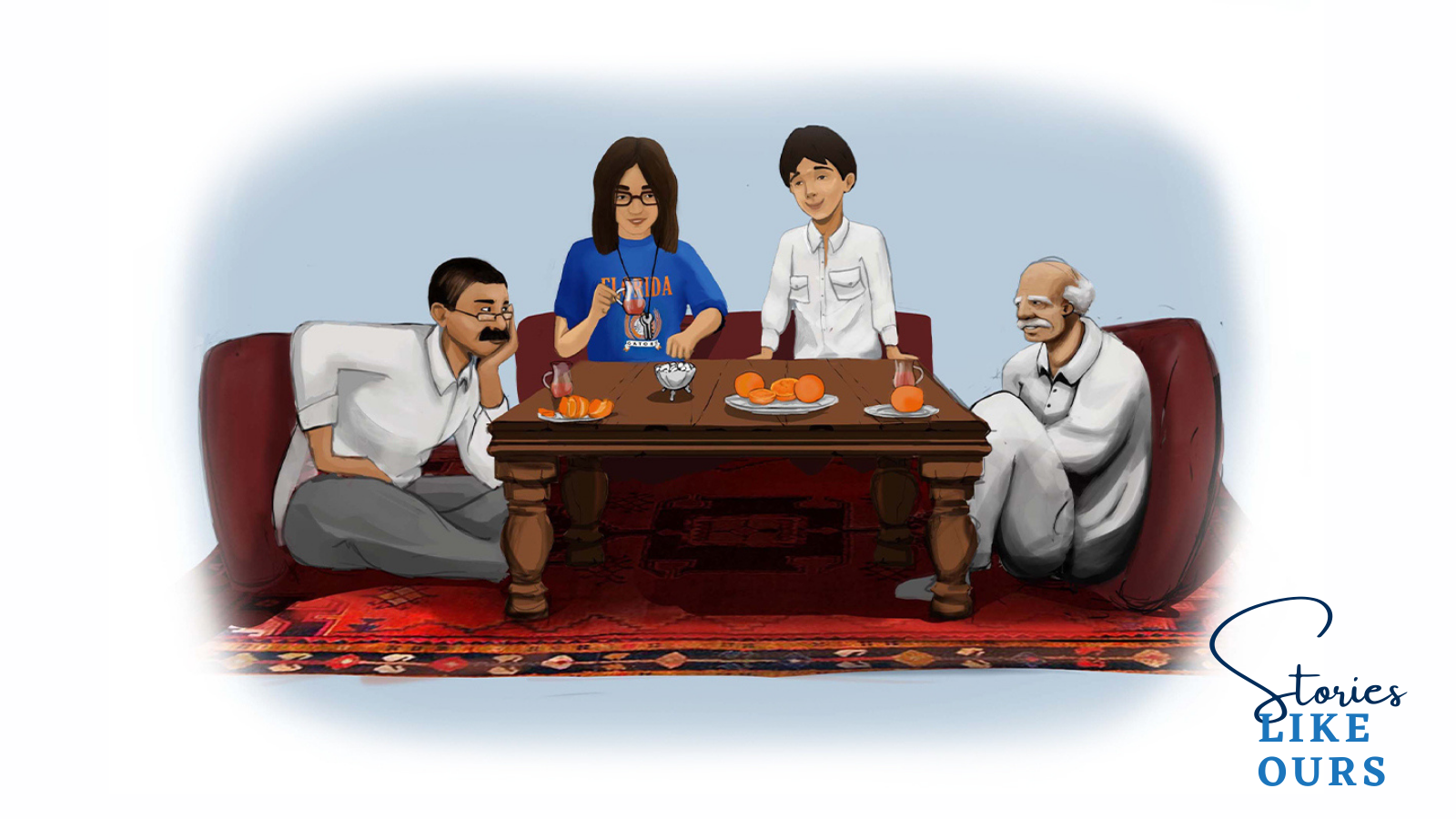 We’re proud to share our Sustainability and Donor Relations Manager’s story–a gripping family journey of displacement, border crossing, and untethered identities. Many of us can pinpoint moments of migration or displacement in our family histories–whether through our parents, our grandparents, or even generations further back. For Amal–and for other members of our team–the work we do at RSN is personal–our stories closely echo the experiences of many uprooted communities today. We need rights-based responses to these situations of displacement–giving individuals a chance to restart their lives, provide for themselves and their families, and escape long periods of legal limbo. By celebrating these stories, we reaffirm our unequivocal solidarity with those we aim to help worldwide.

We hope Amal’s story encourages everyone to connect their family journey with those still in search for a place to call home. Our connection may not be as distant as we think. 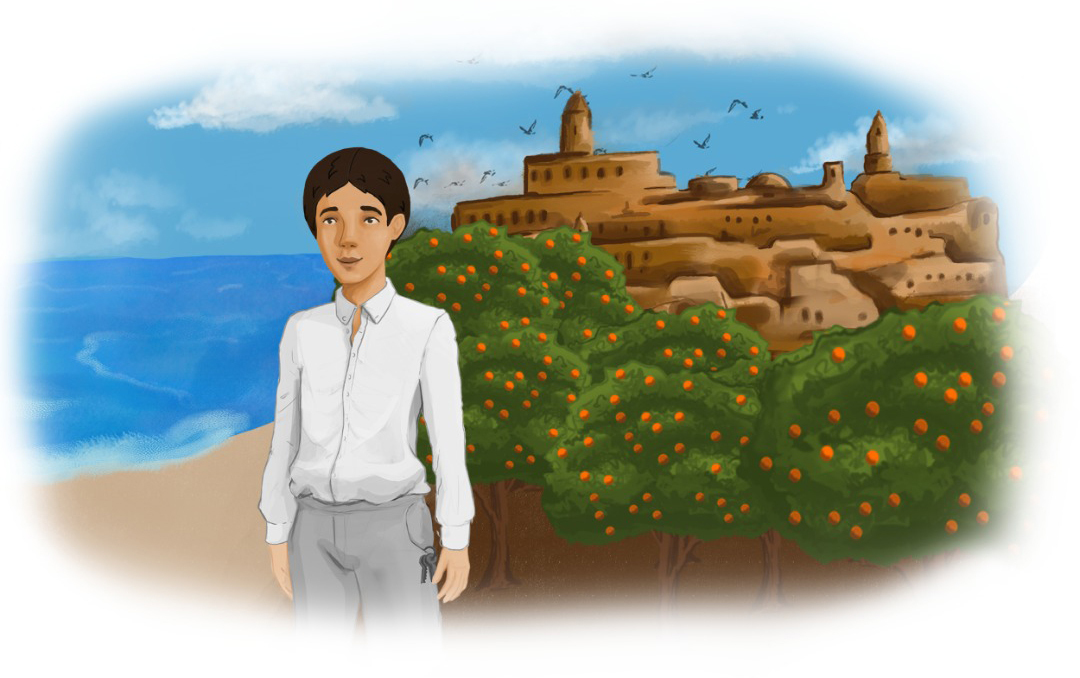 "Nestled in the easternmost part of the Mediterranean, historic Yafa was a port city known for its beloved, sweet oranges. Here, my grandfather lived as a happy child–comforted by the hospitality of home and the smell of the sea. When conflict escalated, my young grandfather and his family fled Palestine–traveling by foot to reach Jordan alongside other newly displaced Palestinians. “This will be temporary,” many thought–reassuring their children as they grasped tighter the keys of home weighing heavy in their pockets, yet heavier on their hearts. For my family, this would be the beginning of our story–a journey of despair, displacement, and determination to one day return home, generation after generation." 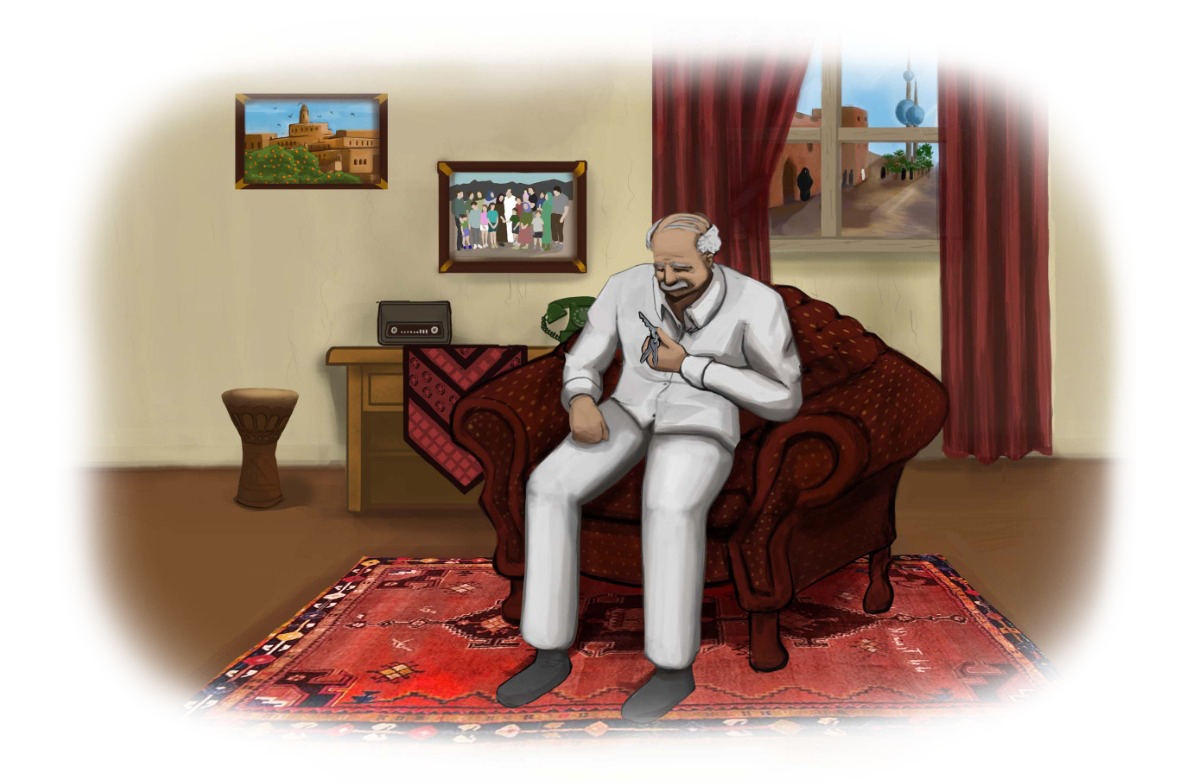 “Though the landscape in Jordan resembled that of Palestine, home was never forgotten as displaced communities replicated family recipes, sang traditional folk songs, and shared stories of ‘baladna’ (our home), over and over. My grandfather’s family lived in Jordan for years—receiving citizenship through an amended nationality law in the 1950s. Yet, lack of educational and work opportunities–along with news of a booming oil industry in the Gulf—led my family to apply for residency visas in Kuwait. My grandfather lived in Kuwait from late childhood and all throughout his adult life. Unable to return to his birth city by the sea, Kuwait became his home. While he lived in Kuwait for decades, he was never treated equally. With no pathway to citizenship, neither he nor anyone in the family could buy a home, own a business, work certain professions, or access particular medical treatments and programs available only to Kuwaiti citizens. Fulfilling that longing for a place to call home, Kuwait held a special place in his heart—in 2014, he passed away there, leaving behind seven children, and 17 grandchildren.”

"My father was born in Kuwait in 1967. Run-down, four-story complexes built on the outskirts of major Kuwaiti cities would house the Arabs who came from across the Levant and Egypt—other migrants with their own stories and struggles like my father. Although he was never granted citizenship, Kuwait was home for him. When Iraq invaded in the early 1990s, he was forced to flee–leaving behind the only life he knew. A familiar feeling of despair washed over him as he recounted family stories he heard growing up of displacement. This time, it was happening to him. With limited prospects to make a livelihood in Jordan and stifling war in Kuwait, a tourist visa to the United States was a significant possibility. Reaching Jordan and flying out from there was the only viable path; yet the journey would be long and daunting for my father and his friend. The two crossed Kuwait, drove through Iraq, and reached Jordan, all in an effort to further avoid the obstacles and dangers they had faced. With little access to fuel, no food, and in danger of being stopped and detained by the Iraqi military–they slept in their car, were price-gouged out of the little money they carried with them, and resorted to offering food as a bribe at certain check-points. Carrying Kuwaiti identification cards was risky, but they made it. Through connections, they were able to board a plane to the United States." 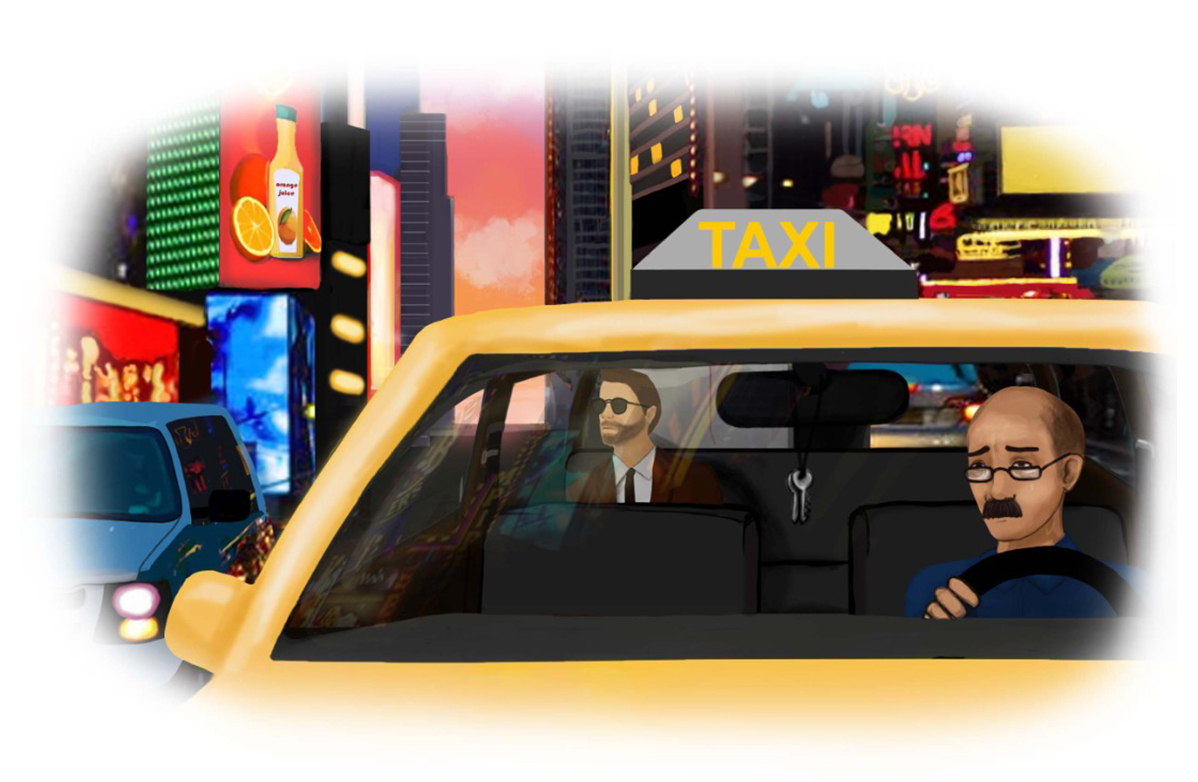 “In 1991, my father landed in NYC. The United States was different. Concrete pavements replaced the empty lots of sand where kids back home played past sundown. The skyscrapers couldn’t compare to his simple Kuwaiti neighborhood. Citing fear of persecution if he returned during the war, my father applied for Temporary Protected Status, a U.S. humanitarian assistance program that briefly included Kuwait in the early 90s. After a lengthy interview process, his application was granted; then, he picked up and left for Chicago. Taxi-driver, grill-cook, restaurant manager–he moved from one job to the next. Grateful for the opportunity, yet terribly missing home, my father would face his own internal war. The starry-eyed foreigner and the overworked migrant in isolation always seemed to exist in tandem. Eventually, he saved up enough money, became a U.S. citizen, and returned to Jordan post-war to marry my mother and start a family.” 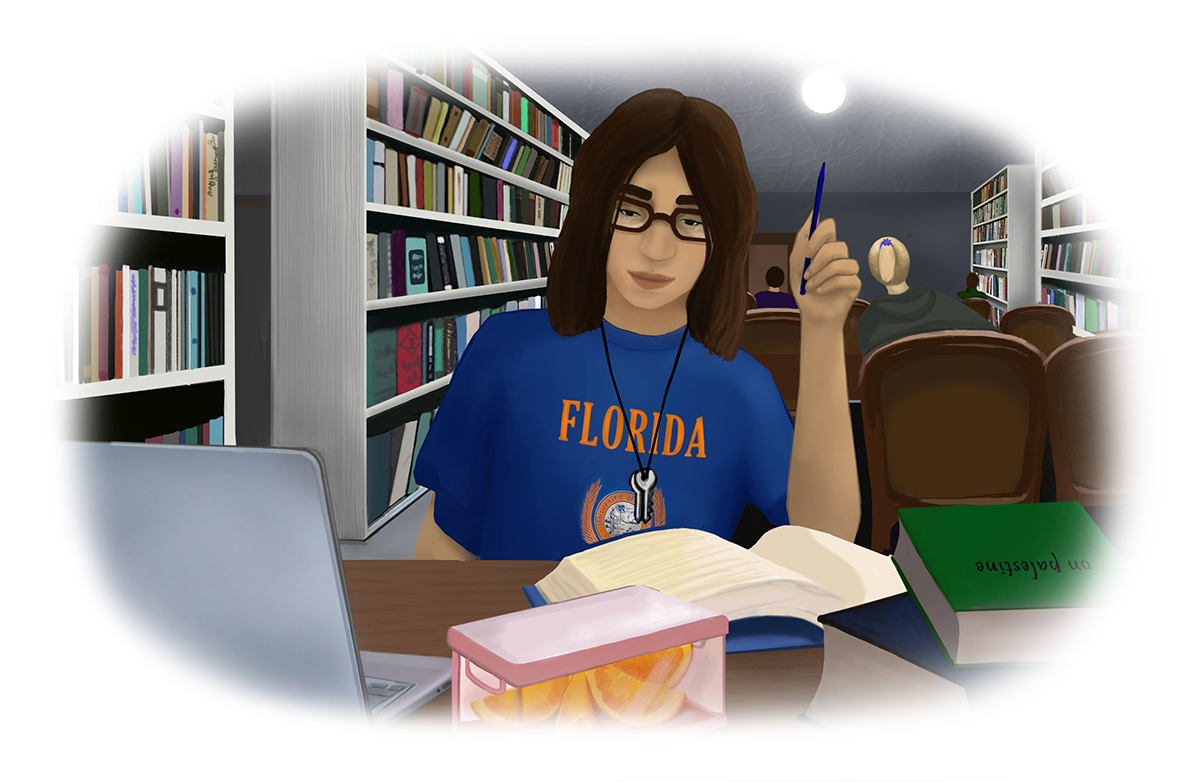 "I was born in Jordan in 1998 to an extensive family history of displacement and migration destined to shape the first 15 years of my life. After birth, to about age five, we attempted to permanently settle in South Florida. However, increased cost of living, and escalating violence against Muslims post-9/11 added a layer of doubt around staying. We decided to return to Kuwait where we still had family; there, I completed the majority of my schooling years. The constant need to pick up and leave played a major role in how I defined myself. For a while, my identity was blurred: Jordanian? Kuwaiti? Palestinian? Arab? Muslim? American?  I never connected to just one, instead I shifted identities to adapt to my environment. We moved back to Florida where I finished up high school and college. At university, I met older Palestinian-Americans on campus who encouraged me to feel confident in my family story of displacement and migration. Welcomed and inspired–these college years left the greatest impact on me. I think about my grandfather and Palestine often, imagining how our lives would have been if we stayed home in Yafa. But I know Palestine is within me, within my father, and deeply rooted in my grandfather and ancestors. I will visit one day and eat an orange by the sea."

To learn more about our work, including our recent publications, click here. If you have any questions, please feel free to email development@refugeesolidaritynetwork.org

STORIES LIKE OURS is narrated by Samah Asfour, RSN Communications Manager; and illustrated by Ayouni Studio